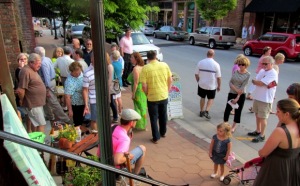 Submissions will be showcased in the “RAW REFLECTIONS” exhibit for the Valentine ARTcrawl on February 13, 2015 from 5pm to 8pm inside the Isaac Taylor House at 228 Craven Street, New Bern, NC. The theme includes visual works of art reflecting upon figures of life drawing, silhouettes of human anatomy, and representations of the human form.

Chris Wagner will introduce the first in his series of paintings representing model Jennifer Stevens Alphin, a current breast cancer patient working her way to earning the title of survivor. Wagner explains, “The idea behind the project is to share her strength, beauty and spirit as an inspiration to other women in similar situations. We want to show other women that despite the physical costs of breast cancer, they will emerge from their battles no less beautiful, and no less of a woman.”  Wagner will work on the series throughout the year to encompass Alphin’s encounters with chemo, mastectomy surgery, and ultimately reconstruction surgery.

Lisa Bisbee Lentz will exhibit a brief classical art history lesson featuring her small oil paintings depicting figurative sculptures from the ancient timeline. Lentz elaborates, “In my study of the human body, I work out the fundamental proportions by copying the marble and bronze statues of ancient Egypt, Greece and Rome. For instance, Polykleitos, the Greek sculptor created Doryphoros (Spear Bearer) in idealistic proportions where a head equals one-seventh of the entire body.” The collection begins with the Archaic style depicting a flat Egyption standing male titled “Kouros” and evolves into Greek idealism and the naturalistic anatomy of Roman realism.

The Valentine show continues late evening at the Brown Pelican with specialty beverages to suit the Valentine occasion.