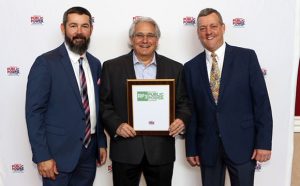 The City of New Bern Electric Department recently received two awards from the American Public Power Association (APPA); one is a Certificate of Excellence in Reliability and the other is the prestigious Diamond designation as a Reliable Public Power Provider (RP3).

The Certificate of Excellence recognizes electric utilities who have significantly exceeded the average reliability of all other U.S. electric utilities for a given year.  New Bern received its certificate for the 2018 calendar year, which included the City’s massive power outages and restorations associated with hurricane Florence.  One of the qualifications for receiving an excellence award is a utility’s participation in the e-Reliability Tracker program, which tracks power outages and restoration against national benchmarks.

The City’s Electric Department also received the prestigious Diamond designation as a Reliable Public Power Provider. The RP3 award means the utility has followed industry standards and practices and has shown high proficiency in providing reliable and safe electric service. This designation lasts for three years and was last awarded to the City in 2015. Only 254 of the nation’s 2,000 public power utilities have the RP3 designation. It focuses on four key disciplines: reliability, safety, workforce development, and system improvement. Criteria include sound business practices and a utility-wide commitment to safe and reliable delivery of electricity. New Bern was recognized yesterday for its RP3 achievement at the APPA’s Engineering and Operations Conference in Colorado Springs, CO. (See attached photo.)

The RP3 designation is comprised of gold, platinum and diamond levels. New Bern achieved a perfect score of 100%, which is the diamond level. It has only been awarded to 107 of the nation’s 2,000 public power utilities during the three-year application cycle from 2017-2019.

“Please join me in congratulating our electric utility staff,” said Charles Bauschard, Director of Public Utilities. “We are lucky to have a team of talented, hard-working individuals who are committed to providing our customers with reliable electric service and who recognize that that reliability is an essential part of business.”