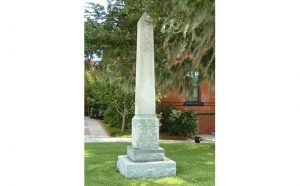 NEW BERN, NC – The American Legion was founded by WWI veterans, and chartered 100 years ago on September 16th. In celebration and remembrance, the American Legion Post 539 and the New Bern Historical Society have partnered with the Craven County Department of Recreation and Parks on a special WWI Memorial Project. Their goal is to update the WWI monument that has stood on the courthouse grounds since 1944.  The update has two parts. First, to clean the 75-year-old obelisk. The second is to add the names of Craven County residents who gave their lives in “The Great War,” but were not originally listed on the stone.

The project is now nearing completion and the renewed monument will be unveiled and all the heroes celebrated on the afternoon of Monday, September 16, at 4:00 P.M. on the Craven County Courthouse grounds. The public is invited to attend. The organizations all want to extend a special invitation to the families of those whose names are added to the monument, and whose deeds will be acknowledged for the first time.  A complete list of those who perished in WWI, is at the end of this article, as well as on NewBernHistorical.org and NewBernPost539.com. Please look and see if your family’s ancestors are listed.

Research on this project has largely been done by Legionnaire, historian and Society member, Mark Sandvigen and by New Bern Historical Society Historian, Claudia Houston. They have pored through records, lists and family histories in an effort to make sure no one is missed.  They would like to hear from families who have information to share on any of these WWI veterans. Following the completion of the monument, their next goal is to publish a book that lists all the Craven County veterans who served in World War I and as many of their stories as possible. Please contact Claudia or Mark at WWIMemorial@yahoo.com if you have photos, memorabilia or family stories you are willing to add to the collection.

The mission of the New Bern Historical Society is to celebrate and promote New Bern and its heritage through events and education.  Offices are located in the historic Attmore-Oliver House at 511 Broad Street in New Bern.  For more information, call 252-638-8558 or go NewBernHistorical.org or www.facebook.com/NewBernHistoricalSociety.

A century ago, there were variations in spelling for some names. Due to old, incomplete records, we have tried to ensure that the spellings we have are correct based on service member’s available birth, service, and death records.

To Be Added to Monument