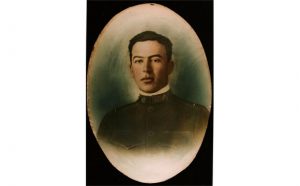 These 16 men died in service to our country during WWI, but their names were not on the monument, until now. American Legion Post 539 and The New Bern Historical Society, in partnership with the Craven County Department of Parks and Recreation, have worked to update the Craven County WWI monument, making sure all Craven County residents who perished during the war are honored. On September 16 the updated monument will be revealed in a special re-dedication ceremony to which all are invited.

It is 100 years since the end of World War I. That special anniversary brings our attention back to those who served and died in that conflict. In Craven County, the 45 men who died in the war are remembered on a monument on the courthouse grounds. All 45 are listed at the end of the article. Now that they have a definitive list, the researchers want to make sure they preserve the stories of those heroes. Legionnaire, historian, and Historical Society member, Mark Sandvigen New Bern Historical Society Historian, Claudia Houston; are working on a book that will capture Craven County’s Great War History based on their research. It will list all Craven County’s sons who died during World War I, and as much of their stories as possible. They would like to hear from any family members who still have memories, information or memorabilia. If you can help, please contact either Claudia or Mark by email: WWIMemorial@Yahoo.com. They are asking for your help in preserving this slice of history that touched so many families in Craven County even as it connected them to events on the world stage.

Join the American Legion and the New Bern Historical Society as the renewed WWI monument is unveiled and celebrated on September 16th at 4:00 PM at the Craven County Courthouse grounds. The public is invited, with a special invitation to those whose family members were recently added to the monument. Come help celebrate and remember those who fought, those who died, and those who came home, but are now gone. The list of those who gave their lives  can be found at the end of this article and at www.NewBernHistorical.org and at https://newbernpost539.com/

A century ago, there were variations in spelling for some names. Due to old, incomplete records, we have tried to ensure that the spellings we have are correct based on service member’s available birth, service, and death records. All of these men are now honored on the monument.