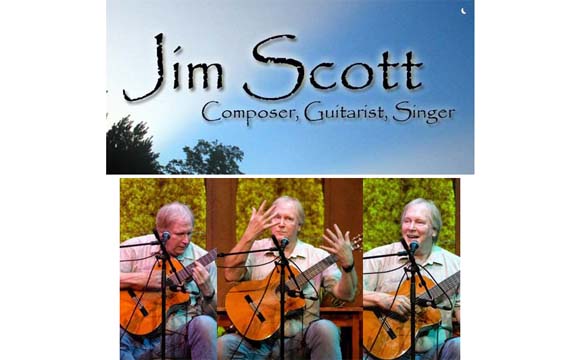 Jim Scott, a performer and song writer who Pete Seeger called a musical “magician”, will perform a concert at the New Bern Unitarian Fellowship on Saturday, January 4 at 7 p.m.

Jim Scott compiled the “Earth and Spirit Songbook”, 110 songs of earth and peace.  Jim’s original songs speak with passion on ecology, justice and peace.  His lyrical poetry and stories are calls to action, full of hope and gentle wit.

A longtime member of the Paul Winter Consort, Jim co-wrote their celebrated “Missa Gaia/Earth Mass” and sang their signature song “Common Ground.”  His eco-anthem “A Song for the Earth” was recorded at the United Nations.  Jim has created an extensive body of work including PBS soundtracks, award winning choral works and seven CDs of original music.  His new CD “Gather the Spirit,” features leading choral arrangements of his songs from the UU hymnbooks and other new creations.

He’s taught courses at such prestigious schools as Oberlin College and been an Artist in Residence in many universities. Jim has degrees from Eastman School of Music and Berklee College.

The hat will be passed with a suggested donation of at least $10.