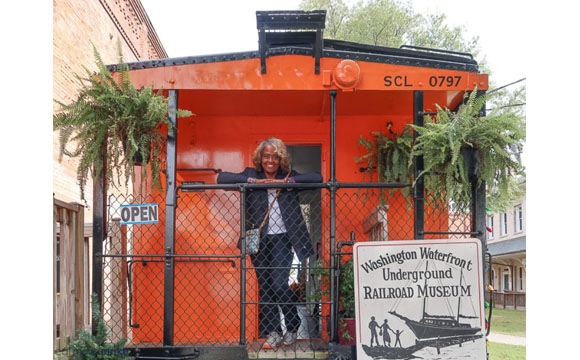 Leesa Jones at the Underground Railroad Museum. Photo from EatMoveMake.com

New Bern, NC – When Leesa Jones spoke at the New Bern Historical Society Lunch & Learn recently, the room was filled immediately, and folks were clamoring for her return! March 14 brings another opportunity to hear this dynamic woman speak about the Underground Railroad in Eastern North Carolina. On March 14 she will appear at St. Peter’s AME Zion Church at 617 Queen Street at 3:30pm, presented jointly by the African American Heritage & Cultural Center and New Bern Historical Society. There is no charge and no reservations are necessary.

The Maritime Underground Railroad was active in eastern North Carolina with its many rivers, creeks, and seaports. This version of the Underground Railroad was so effective that runaway slaves often ran to the coast instead of heading north to reach freedom through overland routes. Leesa Jones will present this fascinating program and share how enslaved people in this area used common items including plants, nursery rhymes, songs, clothing, and dance to convey messages to abolitionists, ship captains, and others in obtaining their freedom. The audience will be engaged to share in the presentation and to learn more about this dark chapter of history in a creative way.

Leesa Jones is the Executive Director of the Washington Waterfront Underground Railroad Museum in Washington, NC. Leesa was born, raised and educated in “Little Washington.” She attended the City University of New York and was a pre-school teacher for thirty-two years before her retirement. She has also been an ordained minister for twenty-four years. Ms. Jones founded the African American Walking History Tours in 2009 and founded the Washington Waterfront Underground Railroad Museum in 2016. The Museum explores slavery, how the underground railroad functioned in the local area and how the enslaved planned and carried out escapes to freedom from the waterfront and the greater eastern NC overland routes. They are a National Park Service Underground Railroad-Network To Freedom Site.

For information contact the African American Heritage and Cultural Center or the New Bern Historical Society at 252-638-8558.