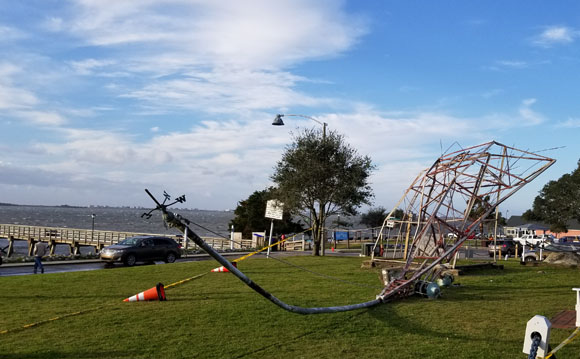 Southport, N.C. – The heavy winds that swept through the region this week took out one of the nation’s few remaining coastal warning display towers.

The storms toppled and significantly damaged early Friday morning the iconic weather tower that stood along the Southport waterfront for more than a century. The tower, owned by the City of Southport, was one of only five reported to still be standing along the east coast.

“It’s a great loss for the maritime history of the Lower Cape Fear and the City of Southport,” Museum Manager Lori Sanderlin said. “The city is working on a plan of action, and we are ready to help support them however we can.”

Southport Mayor Joseph P. Hatern said in a statement that he has asked the city manager to contact a structural engineer to look at the tower to see what options they have.

“This is an important restoration project for the city and we must salvage our heritage,” Hatern said.

Southport’s tower was one of many the U.S. Weather Bureau erected along the coast at the turn of the 20th century by order of then-President William McKinley. He wanted a system in place to warn ships of approaching hurricanes.

“That tower has sat there since the turn of the century,” the museum’s education curator Katy Menne said. “It was an integral part of the Cape Fear weather system.”

The structures themselves are referred to as skeletal frame light towers based on their open, metal frames.

“That construction, that tower, was seen all over,” Menne said.

Specific flag combinations or an array of the tower’s lights would warn mariners of hazardous weather conditions. For example, two red pennants flying indicated gale-force winds.  At night, that message would be signified by a red light over a white light.

The towers were each equipped with three lights: two red and one white. However, Southport’s tower had only two remaining lights: lower red and middle white; the white one broke in Friday’s early morning fall.

The coastal warning network was deactivated in 1989.

The Southport tower also served as a memorial to Jessie Taylor, who manned the tower for more than 60 years. A flag she raised on the tower to warn of Hurricane Hazel hangs in the museum, as do two others that flew during 2018’s Hurricane Florence — just two of the many storms the tower previously withstood.

“This just goes to show that mother nature is always in control and our history is ever-changing,” Menne said. “We are a strong community and we will not lose our identity.”

About the N.C. Maritime Museum in Southport

The N.C. Maritime Museum at Southport tells the story of the Cape Fear region and its people.  The museum is at the intersection of the mighty Cape Fear River and the vast Atlantic Ocean. It shares tales of pirates and pillage, blockade running and riverfront archaeology, and other nautical adventures. Ongoing educational programs for children and adults about this area, which was a haven for blockade runners and also a pirate hideout, are available.

The North Carolina Maritime Museum at Southport is open Tuesday – Saturday 9 a.m. to 5 p.m.  The museum is open to the public with free admission. Donations are always appreciated. For more information, visit www.ncmaritimemuseumsouthport.com.

About the North Carolina Department of Natural and Cultural Resources

The N.C. Department of Natural and Cultural Resources (NCDNCR) is the state agency with a vision to be the leader in using the state’s natural and cultural resources to build the social, cultural, educational and economic future of North Carolina. NCDNCR’s mission is to improve the quality of life in our state by creating opportunities to experience excellence in the arts, history, libraries and nature in North Carolina by stimulating learning, inspiring creativity, preserving the state’s history, conserving the state’s natural heritage, encouraging recreation and cultural tourism, and promoting economic development.